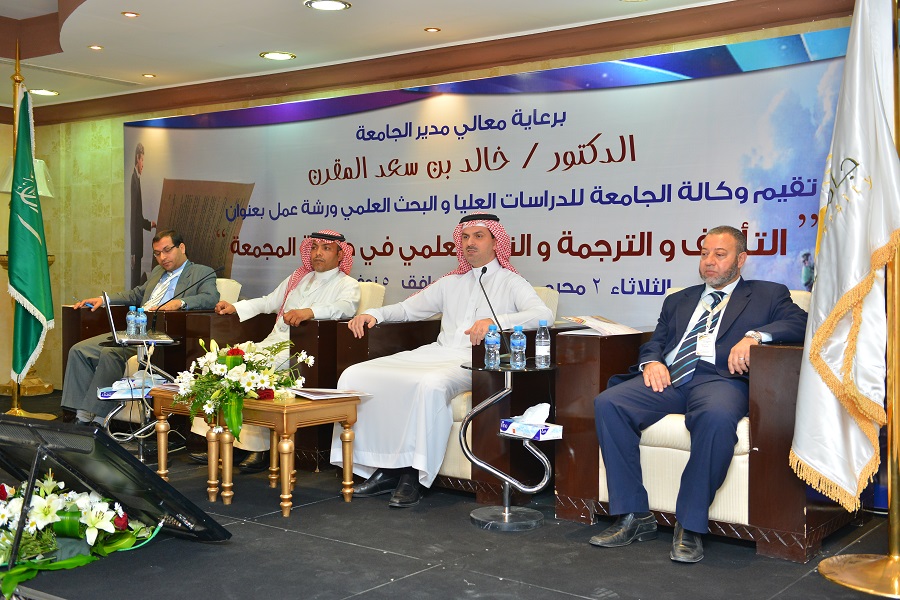 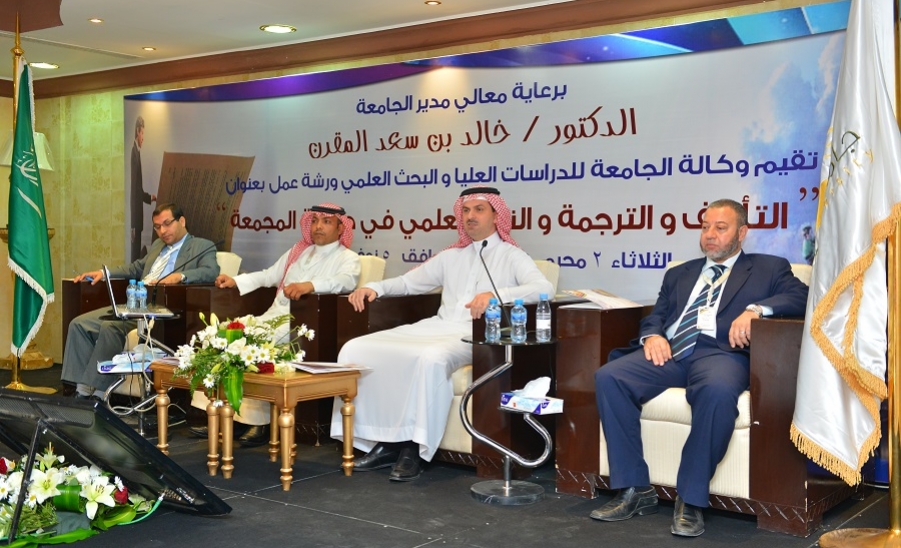 Under the patronage of His Excellency the Rector Dr. Khalid Al-Mogren and honor presence of His Excellency the Vice-Rector for Postgraduate Studies and Scientific Research Dr. Mohammad A. Al-Shai’a, the University Vice-rectorship for Postgraduate Studies and Scientific Research has organized a workshop titled Writing, Translation and Scientific Publication at the University” at the Honorary Hall. The workshop which was conducted at the complex of colleges was aired to the College of Education of female section in Zulfi and Majmaah.

The workshop has two essential objectives; firstly, to promote awareness among the targeted group of the role that could be played by the Center for Publishing and Translation in assisting faculty members to publish and translate their work. Secondly, it also aims to promote the culture of writing, translation and scientific publication at the University.

DR. Al-Shai’a delivered a speech where expressed his thanks to the audience then shed a light on the various topics of the workshop and what services it could contribute to the University staff. He also encouraged all staff to submit their work including writing and translated work to the center. He then noted to some inspiring visions of the center and followed by launching the center.

Dr. Saleh Al-Aqeel, Director of the Center, gave a talk where he focused on the objectives and visions of the center as well as the procedures of writing, translating or publishing a work. He also made a reference to the forms of applying and the scientific journals published by the center.

Prof. Tariq Ismail delivered a speech on the “International Scientific Publication” where he focused on the importance of international publication and the way & means of preparing a journal to be published internationally. He also made a reference to the mechanisms of examining journals by referee as well as the best practice of marketing the intellectual property.

Finally, a brainstorming session was held to come up with ideas that will contribute to the development of the center. The obstacles of the center were also discussed with the key speakers who also answered the audiences’ inquires. The workshop was concluded with the recommendations.