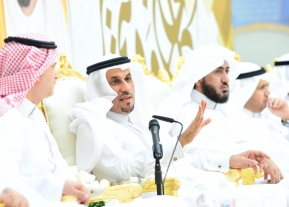 Majmaah University Rector, Dr. Khalid Al-Mugren, congratulated the Custodian of the Two Holy Mosques King Salman bin Abdulaziz on the occasion of unveiling the annual budget for the fiscal year 1440 /1441 AH (2019). The achievements and stance of the Custodian of the Two Holy Mosques, nationally and internationally, over the past four years should not go unnoticed. The announcement of 2019 budget and the royal decrees issued creates a sense of optimism. It is one step in the right direction for a comprehensive work to have a robust economy that is based on a diversified income. This is a clear evidence of the stability of the Kingdom politically and economically amid the difficulties affecting many of the world countries. MU Rector considered the tendency of the country to be transparent in announcing the budget and spending for this year another evidence of the concern that the government is giving to its citizens. In the statement of the annual budget, the government’s prospects for next year’s budget in terms of spending, revenues, deficits and fund were stated with the possibility of being reviewed. Being marked as the budget with highest spending in the history of Saudi Arabia, MU Rector has also expressed special congratulations to His Highness Crown Prince Mohammed bin Salman, Deputy Prime Minister and Minister of Defense, who is considered to be the founder of the new vision of the Kingdom 2030.